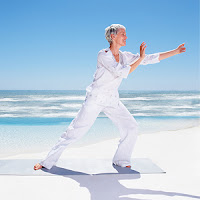 What is Tai Chi?

Tai Chi is a sequence of dynamic movements that combine soft and hard, with fast and slow actions, in a balanced and natural way that adheres to the philosophical Taoist principles of yin and yang from the "yijing" (Book of Changes). Contained within its framework are spiralling, twisting, and unique silk reeling energy movements, jumps, leaps and explosive energy releases.
During practice the body remains relaxed with the practitioners consciousness, breathing and actions all closely connected. These unique features enhance benefits to health, fitness, and weight-loss and are just a few of the reasons why so many people, regardless of age and level of fitness, regularly practice Chen Style Tai Chi throughout the world today.
Chen Style Tai Chi continues to remain true to its original meaning and application since it creation - with the current head of the Chen Family, Grandmaster Chen Zhenglei, internationally recognised as one of the highest level masters within the art.

What is Chen Style Tai Chi?
Chen Style Tai Chi (Taijiquan) was created in Chenjiagou Village, Wenxian County, Henan Province, China in the late Ming Dynasty, almost 400 years ago, by the 9th generation Chen family member; General Chen Wangtin. Following a decorated military career General Chen retired to Chenjiagou where he began formulating an internal martial arts that incorporated the wisdom of the ancient Taoist philosophy of Yin and Yang, with specialised breathing techniques, and a profound understanding of the internal energy meridians "jingluo" used in Traditional Chinese Medicine.
Such was its intrinsic power that the art was only passed from master to student in great secrecy and remained hidden for almost 300 years within the village. It was not until the 14th generation of the Chen family (around 120 years ago) that Grandmaster Chen Changxing taught the art to Yang Luchan, a household servant. Yang Luchan (founder of Yang Style Tai Chi) was the first to take the art away from the village and quickly his reputation spread throughout China as an unbeatable Kungfu master using this fascinating art.
During the popularisation of Yang Style, Chen Style remained within Chenjiagou, with its village members dedicated to the advancement of all aspects of their tradition, just as their ancestors had done for almost 400 years.
Chen Style Tai Chi has only recently made its appearance on the world scene and is fast becoming the most popular form of Tai Chi in the world today. Both old and Young Tai Chi practitioners are beginning to appreciate why generations of the Chen family were determined to maintain their sacred art in its purest form so that everyone may experience the maximum benefits under their guidance.

Tai Chi and Health
Tai Chi exercises regulate all systems within the body improving digestion, respiration and circulation. As the movements are performed in a relaxed manner this can also lead to a reduction in stress-related disorders. The low-impact nature of the routines improves the condition of bones, joints and muscles without strain whilst encouraging balance, focuses, flexibility and co-ordination to promote health and vitality within the individual.
Tai Chi is recognised by the Chinese Government and many Health Institutes around the world as the form of exercise that offers one of the greatest all-round benefits to health.
Western studies at universities such as Harvard Medical School of Research and reported widely in peer-reviewed literature such as the British Medical Journal state the  health benefits to include:
·         Reduced joint pain & stiffness
·         Increased auto-immune function
·         Weight loss – more than Pilates & between weight training and Curves circuit training
·         Dramatically improved balance and flexibility
·         Improvement in symptoms for those with Fibromyalgia
·         Decreased blood pressure and cholesterol levels
·         Easing symptoms of osteo  and rheumatoid arthritis
·         Stopping deterioration of post-menopausal bone density
·         Strengthening heart fibres in post cardiac patients
·         Increases aerobic capacity and blood gas exchange for sufferers of COPD
·         Improved sleep
·         Reduced anxiety
·         47% reduction in falls

Tai Chi Push Hands
Push-hands is a practice method of traditional Tai Chi martial arts. Two students with their arms in contact practice twining and sticking actions to develop the sense of touch, awareness and balance within the body. This is the training method where Tai Chi movements connect with martial arts applications, and develops the understanding of how small forces can defeat strong physical power.

Who can practice Tai Chi?
Tai Chi is suitable for people of all ages and levels of physical fitness. The movements can be performed slowly and gently for health and relaxation, or faster and more powerfully for fitness and self defence applications.

How do I know which style is best?
For grading, the "Chinese Wushu Association" recognises only the following martial arts: Changquan / Chen Style Tai Chi / Yang Style Tai Chi / Xing Yi Quan/ Bagua Zhang
Of these only "Chen" and "Yang" are recognized forms of Tai Chi.
No other styles are recognized at this time.

Should I study Chen or Yang?
Either or both! The academic research into health benefits is primarily based on Chen and Yang styles. Master Sifu teaches both Chen & Yang so Health Tai Chi students need not make a choice.

How do I know if the "Instructor" is qualified?
Your prospective teacher should be happy to provide a certificate or diploma that demonstrates training as a "coach" or "instructor" and a way for you to research them independently.
Your instructor should also be a member of the "Tai Chi Union of Great Britain," which is the largest peer group of mutually-recognizing instructors in the UK - by a country mile. It should raise a red flag if someone isn't listed on the website.
You can also request a look at their insurance certificate. Insurance companies are often quite demanding of their insured's to prove that a client can back up a claim of this or that qualification or level of experience.

Do all instructors have to have a "Dan" grading?
No, it is true that some instructors may be quite proficient without official Duan Wei grading (ie a black belt) but technical knowledge and international recognition should be an important factor when choosing a Tai Chi school if the possibility of progression might be a personal aim.

How long does it take to learn a form?
The rule of thumb is that to learn a basic form to the level of showing gross movements, a minimum 36 weeks to 1 year is the typical student experience. Afterward one learns the finer movements, which can take the following 2 to 3 years. “Patience T'ai Chi Association” in New York under Grandmaster Cheng Man-Ch'ing (direct heir of Yang Lu-Chan, founder of the Yang Family Style of Tai Chi) has a superb article on the question and is available as a link from the “Health Tai Chi” website.

What is an "Open" Class?
The pedagogy of the "open" class is based on the Chinese method of instruction. Unlike many forms of Western or Japanese martial arts, in ancient Chinese Martial arts and is still true of Tai Chi today, one is either a novice or a master - there are no belt grades in between white and black.
This means that everyone learns the same content ... at the same time, regardless of skill level. The benefit to a new student is of course they can join a beginner's class anytime and feel at ease with the pace and movements being practiced.

By day, Victoria can be found walking her rescue dog & running a small but perfectly formed academic publishing house. Master Sifu's only goal is for you to relax, rejuvenate and enjoy better health. 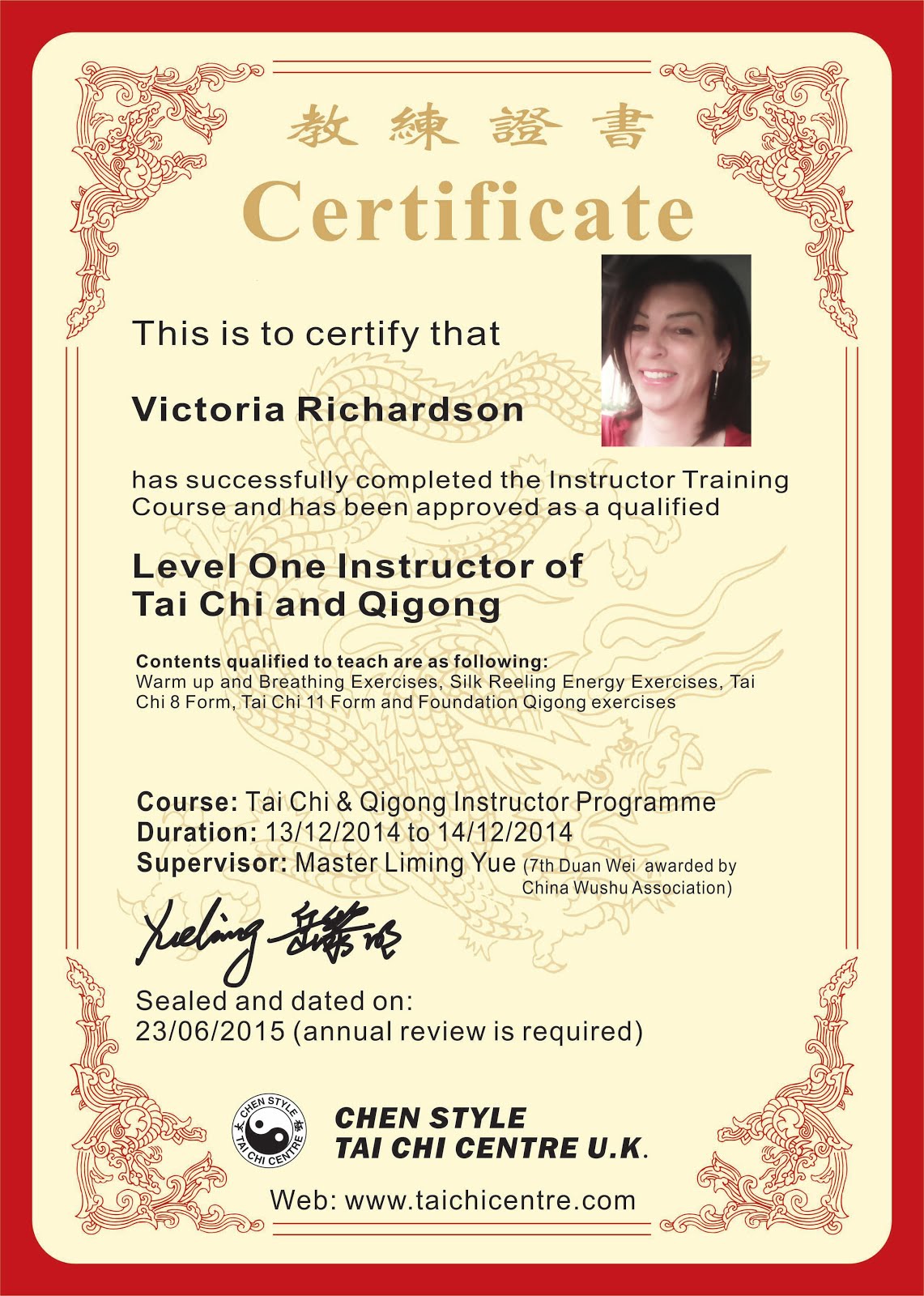